The Chariho Regional School District educates over two thousand students who attend classes in the Town of Richmond at the Chariho High School and Middle School, Career and Technical Center, RYSE Program, and the Richmond Elementary School. Keeping students safe and encouraging appropriate behavior in the school system is important to the Richmond Police Department. The main goal of the SRO is to prevent juvenile delinquency by promoting positive relations between youth and law enforcement. The SRO position encompasses three major components, which include law enforcement, education, and counseling. By maintaining a regular presence on campus and employing a balance of those three components, the SRO has an opportunity to be proactive in debunking myths and negative stereotypes and/or limited understanding of the role of police in schools. The SRO frequently educates students on various laws, especially those that are most applicable to them as new drivers, and other relevant topics. The SRO is also active in counseling students in various capacities, sometimes through dispute mediation and sometimes as a trusted confidant who can assist a student in identifying an underlying problem and coming up with effective strategies to address or mitigate that problem. Ultimately, the SRO is dedicated to providing a safe and secure campus while remaining involved in the lives of students as a positive adult role model. Through his steady efforts to connect with students, the SRO's intent is to bridge the gap between law enforcement and the youth of the community through trust and positive experiences.

Officer Anthony J. Zoglio II, known as "Tony," has been with the Richmond Police Department since graduating from the RI Municipal Police Training Academy in 2007. Tony was born and raised in South County, and graduated from the South Kingstown High School in 1996.

Officer Zoglio was selected to serve as the SRO in 2010, and is in his second consecutive year in that role. It is clear that he has had success in establishing a healthy rapport with students and administrators in the school system, and enjoys being a positive influence to the students.

In addition to his career as a police officer, Tony has served since 1992 as a volunteer firefighter with the Union Fire District of South Kingstown, and remains active to this day. His experience as a firefighter came in handy during his first year as SRO, when he heard a fire alarm and discovered smoke billowing from the roof of the Career and Technical Center on a cold and snowy February 1st, 2011. Tony ran towards the smoking building as he reported the fire by radio, and requested the fire department. Moments later, he and Chief Fred Stanley of the Hope Valley-Wyoming Fire Department, entered the building together and proceeded into the heat and blinding smoke that was raging in one of the shop classes. They located the source of the fire near the back wall, which had fully engulfed two (2) wooden tables and surrounding debris located against the back wall. Despite the heat and thick black smoke, both men located fire extinguishers and were able to put out the fire. Their quick and courageous actions undoubtedly saved thousands of dollars in additional damage to the structure and consequently protected others from potential harm.

Tony is currently spearheading our Text-A-Tip program through the combined efforts of the Chariho Tri-Town Task Force and the Richmond Police Department to combat underage drinking, illegal drug use, and impaired driving. The program is being piloted in the Chariho Regional High and Middle Schools, where most students are already skilled in TEXTING as a primary means of communication. Those providing information remain anonymous while working to have a positive impact on their community while keeping their peers and fellow students safe. 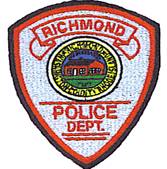 This institution is an equal opportunity provider.